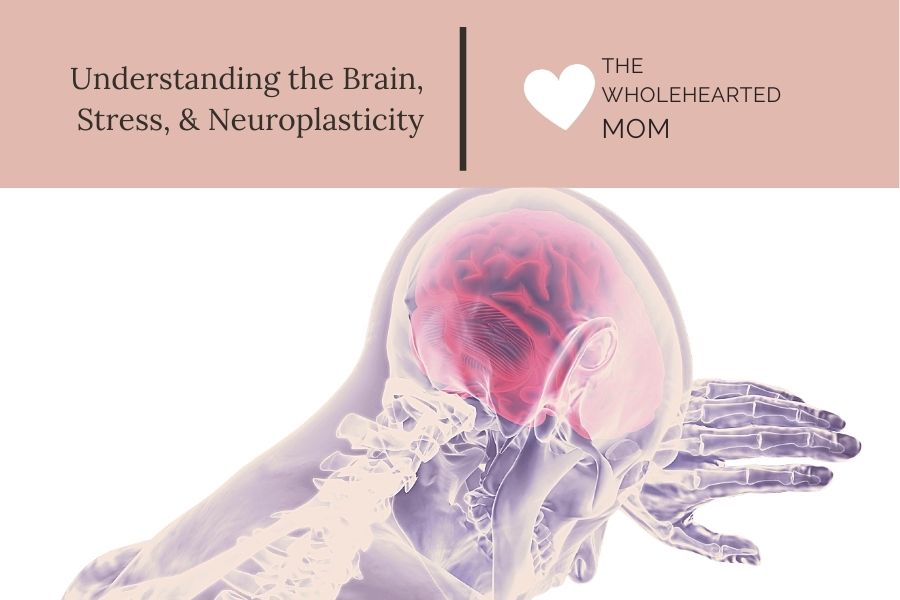 The very first thing I want you to know is that stress isn’t bad. And that stress is normal. Stress motivates us to do well and is a survival mechanism.

But when we have too much stress or stress over a long period of time (prolonged stress) it can begin to cause damage.

Why stress & the brain?

You might be wondering why I am writing a piece on the brain. Well, you may or may not know that our brains are key players in terms of how we respond to life, how we handle stress, and process emotions.

Our brain is a map, showing us how we learn and why we behave the way we do. Understanding your stress response system, and how our brain works, is one of the greatest tools we can have in working towards mental health, wellness, and healing. 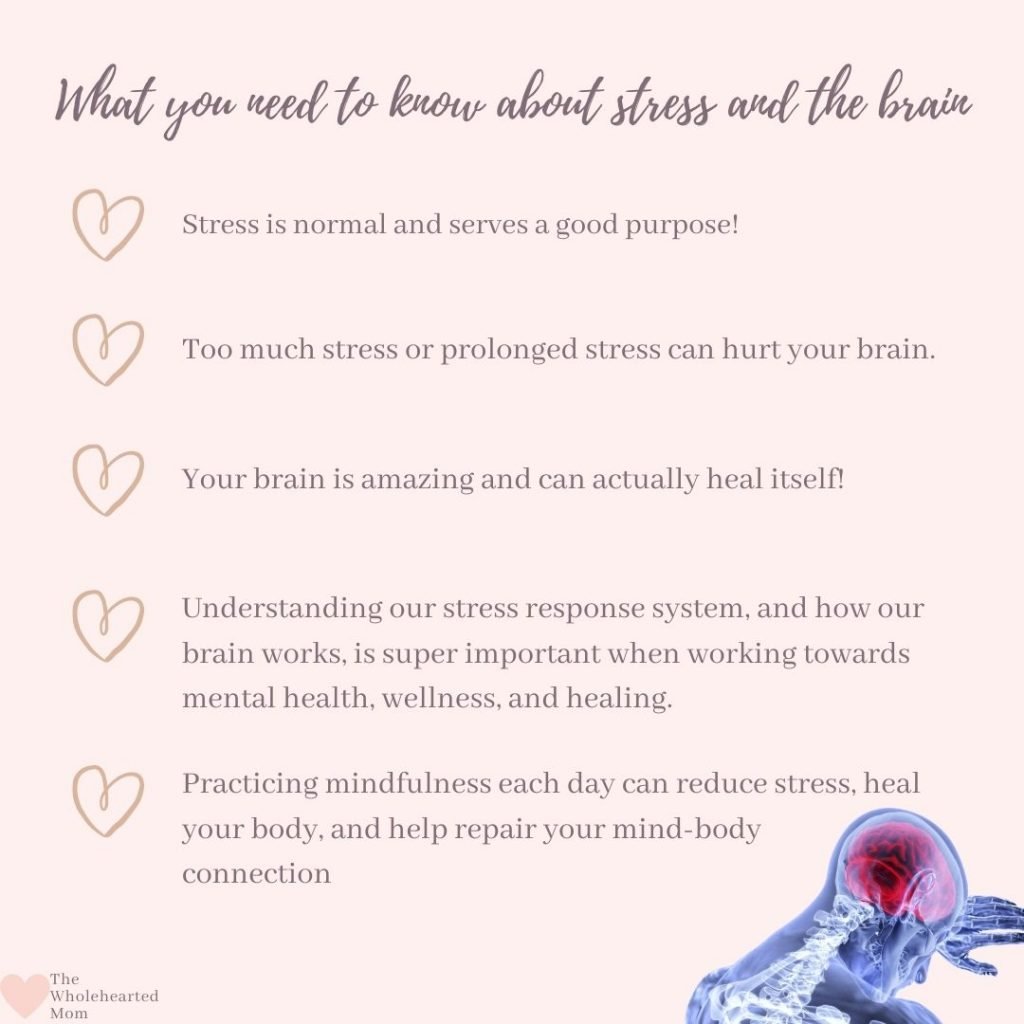 I bet many of you are thinking ‘Oh no, not neuroscience! These big words and confusing processes are way over my head”.

Well I am with you there! I am a social worker, not a doctor or scientist. Therefore I am going to give you the social work version of how the brain works in a way that hopefully many can understand. I invite you to follow along playfully while we learn the brain together.

The part of the brain we are going to focus on is the limbic system, as it controls emotions and motivations, and the prefrontal cortex. Let me break it down for you…

First, I would like to introduce Amy, your amygdala, to you. Amy is a security guard who specializes in martial arts (or a pair of almond-shaped structures in your limbic system).

Your amygdala reacts to fear, danger, and threats. Amy regulates your emotional state.

When you are in a positive emotional state Amy sends incoming information to Olly, the thinking part of your brain (who you will meet below). 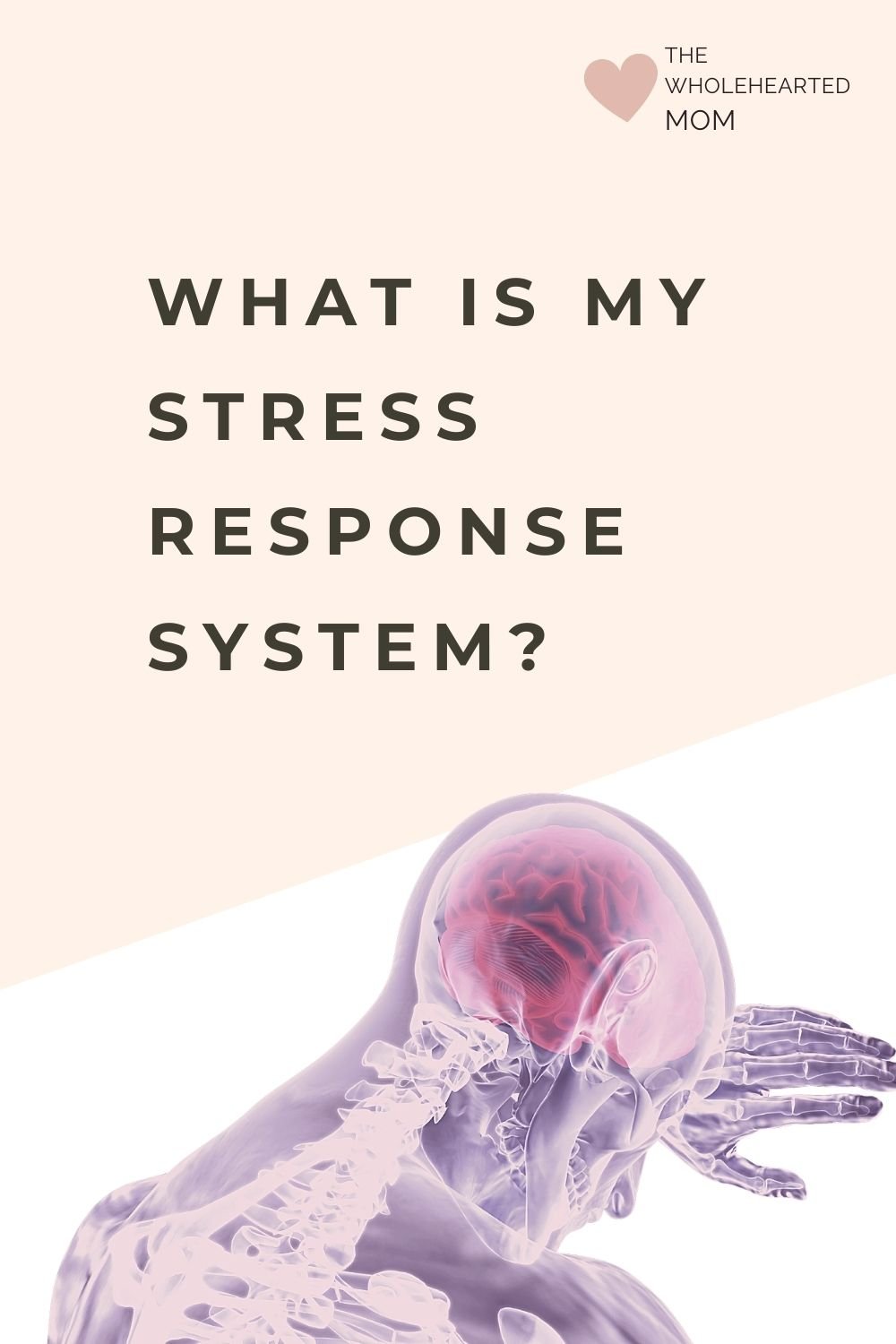 But if you are in a negative emotional state (ex. stress or fear) Amy prevents you from higher-level thinking and reasoned judgement. Instead, she reacts with an automatic response of fight, flight or freeze.

When Amy takes over, we call this an amygdala hijack.

A great example of the amygdala hijack is road rage. Have you ever caught yourself yelling and cursing at the car who cut you off that is now a kilometer up the road and can’t hear you?

Next I would like to introduce to you, Hippo the Camel, your hippocampus. Hippo is also part of the limbic system structure.

Your hippocampus assists in managing your response to fear and threats as it is a storage vault of memory and learning. Similar to a Camel who stores water. Hippo stores memories so that Amy can react quickly!

Olly is highly evolved and controls our decision making, focuses our attention, and allows us to learn to read, write, analyze, comprehend, and interpret.

Amy (amygdala), Hippo the camel (hippocampus), and Olly (pre-frontal cortex), make up ‘TEAM BRAIN’. Team brain has to work just like a team, each with their own position or job to do. I am now going to create a picture for you to further explain how they work as a team to create your emotional and behavioural responses.

Stress, A Long Time Ago

Imagine a time, years ago, when people were hunter-gatherers. Life was pretty simple. Your greatest threat was usually a large animal such as a lion or bear. Your brain was designed for times like these. Amy was really good at her job.

Imagine now you are in a forest collecting berries for your family. You turn around and standing in front of you is a large mama bear. Amy instantly jumps into action and responds with fight, flight, or freeze. She gets your heart pumping, and your adrenaline going – she is ready for action.

You scream and run away as fast as you can. Thankfully you startled the bear and she took off. Hippo then stores your response so that you can react even better next time. In this situation you are very thankful for Amy and the role she plays on Team Brain.

Now imagine a week later you are again walking through the forest collecting berries. When suddenly you hear a rustle in the bush beside you. Hippo remembers this feeling. He remembers the smell of the berries, and the sound of rustling leaves.

Hippo alerts Amy who jumps into action causing you to scream and jump with fright, only to realize… it’s a squirrel.

Although it was a false alarm you still appreciate Amy and Hippo as you are aware you are in the forest and there could be a bear, you want to be ready!

But what about those times when there is no real threat, yet Amy has your adrenaline going and your body ready to fight, flight, or freeze?

Stress - the bear of today

You see, there are 2 dilemmas with how Amy works in today’s world. One, Amy doesn’t have the ability to differentiate between real threats or perceived threats. Hippo and Amy are really good at their jobs of responding to threats, but sometimes they overreact and set off a ‘false alarm’.

Two, the treats most of us face today are very different from a bear in the woods. For example, we may freeze in a stressful situation such as taking a test, in which Amy doesn’t allow us to access our dear friend Olly who we need in order to pass this test.

This is an example of unmindful behaviour. We react before we allow our mind to think about and process the information.

How come I experience this fight, flight or freeze response when there is no threat? Why do I always feel like there is a threat? How do I make changes? Can I change?

These are all really good questions… keep reading and we will look deeper into how to create mental health, wellness, and healing in our everyday lives. We can achieve this by using tools such as mindful thinking, mindful actions and by harnessing neuroplasticity.

Like I mentioned before, the problem is that in today’s society we are constantly faced with stress and overwhelm our bodies and brains. Your day may start off with sleeping through your alarm. So your amygdala kicks in and you rush to work arriving late. (ps. Need help with sleep? Read this.)

Then after checking your schedule you realize you have a big meeting in 30min that you don’t feel prepared for.

You are so behind at work you work through your lunch.

Your afternoon is spent running around at work. Followed by rushing home to eat something, you can microwave, before rushing off to a social gathering or child’s activity.

You don’t stay late as you know you have to get up early for work and finish a couple things before bed. Let alone tackle housework/chores. By the time you finally crawl into bed your brain may also be overwhelmed about bills, kids, relationships, or your future.

After laying awake for hours you finally crash feeling overwhelmed and exhausted.

Can you feel the stress just reading that paragraph? If so take 3 deep slow breaths.

The problem? Too much stress for too long.

In today’s world, we deal with stress all day long without a break or a way to exert our energy and adrenaline. Back in caveman days if you were running from a lion your body is using all the adrenaline and stress hormones as you run.

And I’m guessing that once you reached safety you would sit a rest for 15-20 min in order to allow your body time to return to a level state.

When we experience this increased stress on a daily basis for years and years our body thinks this heightened state is our new baseline and adapts accordingly. This is known as ‘chronic stress’.

Want to learn more about how stress actually affects your brain? Click here

Neuroplasticity (Healing Your Brain from Stress)

Can I change? The good news…. Yes!

And it is going to take some work on your end to make it happen.

Our brains are amazing and complex. Our brains are constantly changing and adapting which means that changing habits, thought patterns, and healing from trauma are not impossible.

That doesn’t mean it will be easy. Depending on many factors including age, life circumstance, and personality. It may take 21 days to make changes or it may take years.

What is neuroplasticity? (watch here)

Some research says it takes about 21 days in a row of making a different choice for our brain to recognize the new path as a default. It will also take more energy because when we try something new or begin to make new choices our brain is physically altering and adapting to accommodate these new changes.

Have you heard of Ulysses contract? It is an ancient technique for building better habits. Using this contract or pact allows us to make a choice in the present that binds us to or “locks us in” to an action or decision in the future. Making it easier for us to follow through.

An example of this would be messaging a friend and asking her to go for a walk tomorrow night at 7:00pm. You know that you likely won’t feel like exercising tomorrow night. So, instead of leaving it up to your mood and motivation you made a decision in the present to support you in accomplishing your goal.

You know you aren’t going to bail on your friend and therefore will get your walk in. What decisions can you make today or safeguards can you put in place to help you better manage your stress for the next 21 days?

Wanna learn more about the brain and neuroscience? Here is an amazing Tedx Talk by Lara Boyd – After watching this your brain will never be the same or this list of 9 Ted Talks on Neuroscience

Mama, Are you longing for to be at ease in your motherhood?

Here is a free workbook to help you through the first steps in becoming a better mom for both you and your children.

You will receive an email with your download shortly.

Share the love! We want to reach as many mamas as possible with this important and invaluable information. If you are able to, please pin your favourite image and help someone else on their journey of becoming a Wholehearted mom! 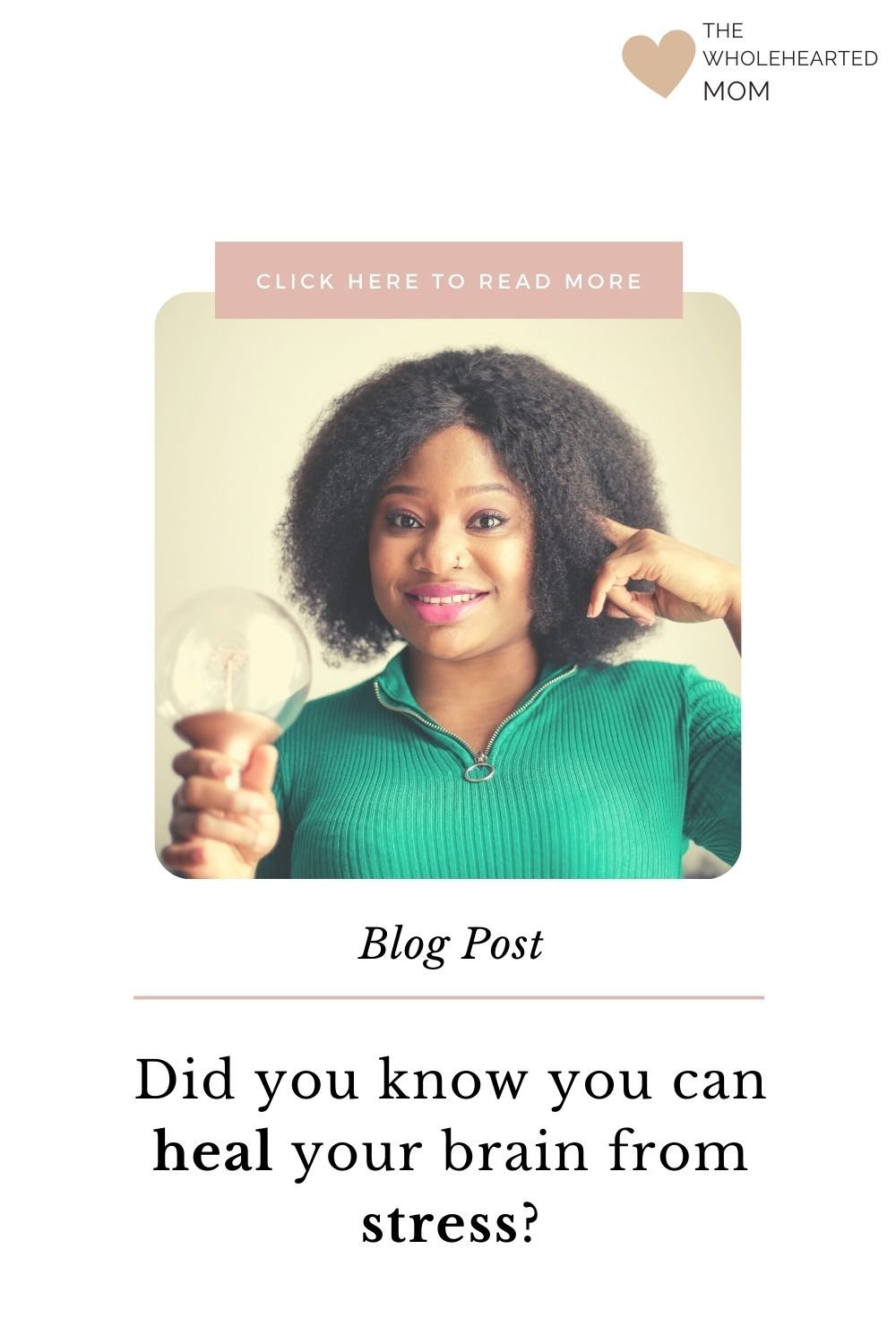 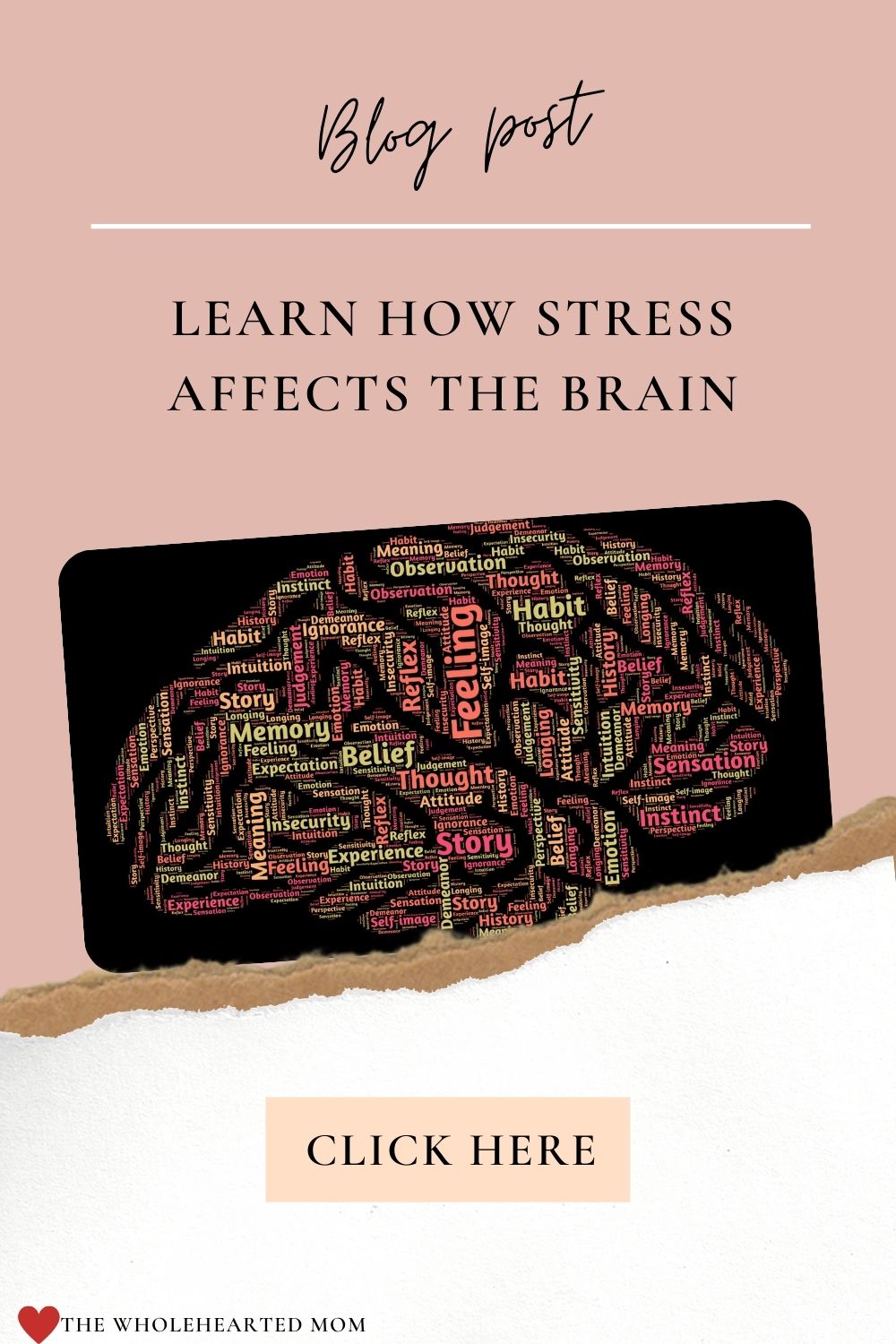 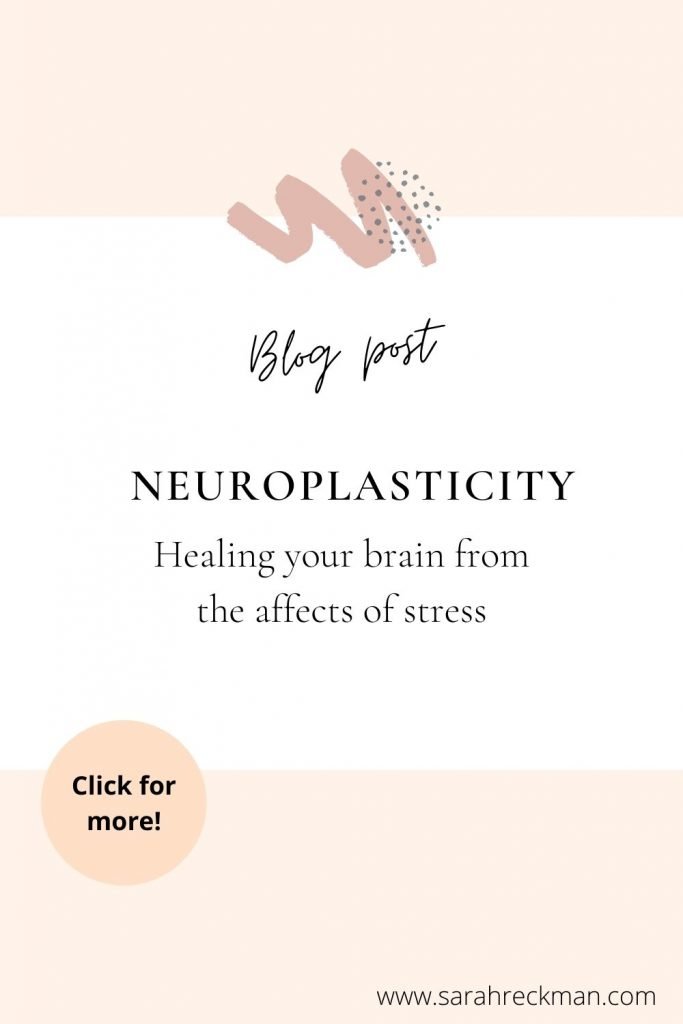