Home » Uncategorized » How To Create Boundaries For Working Moms

How To Create Boundaries For Working Moms 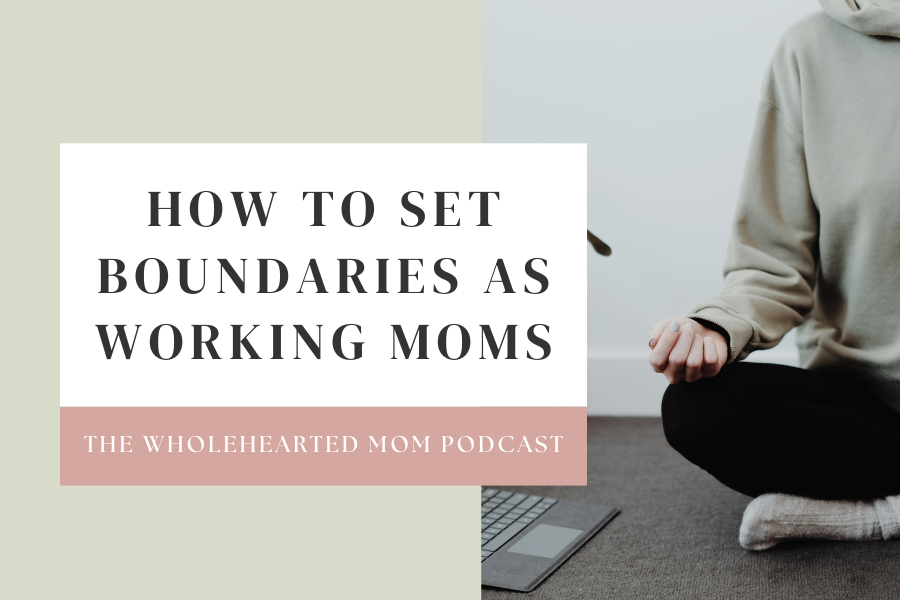 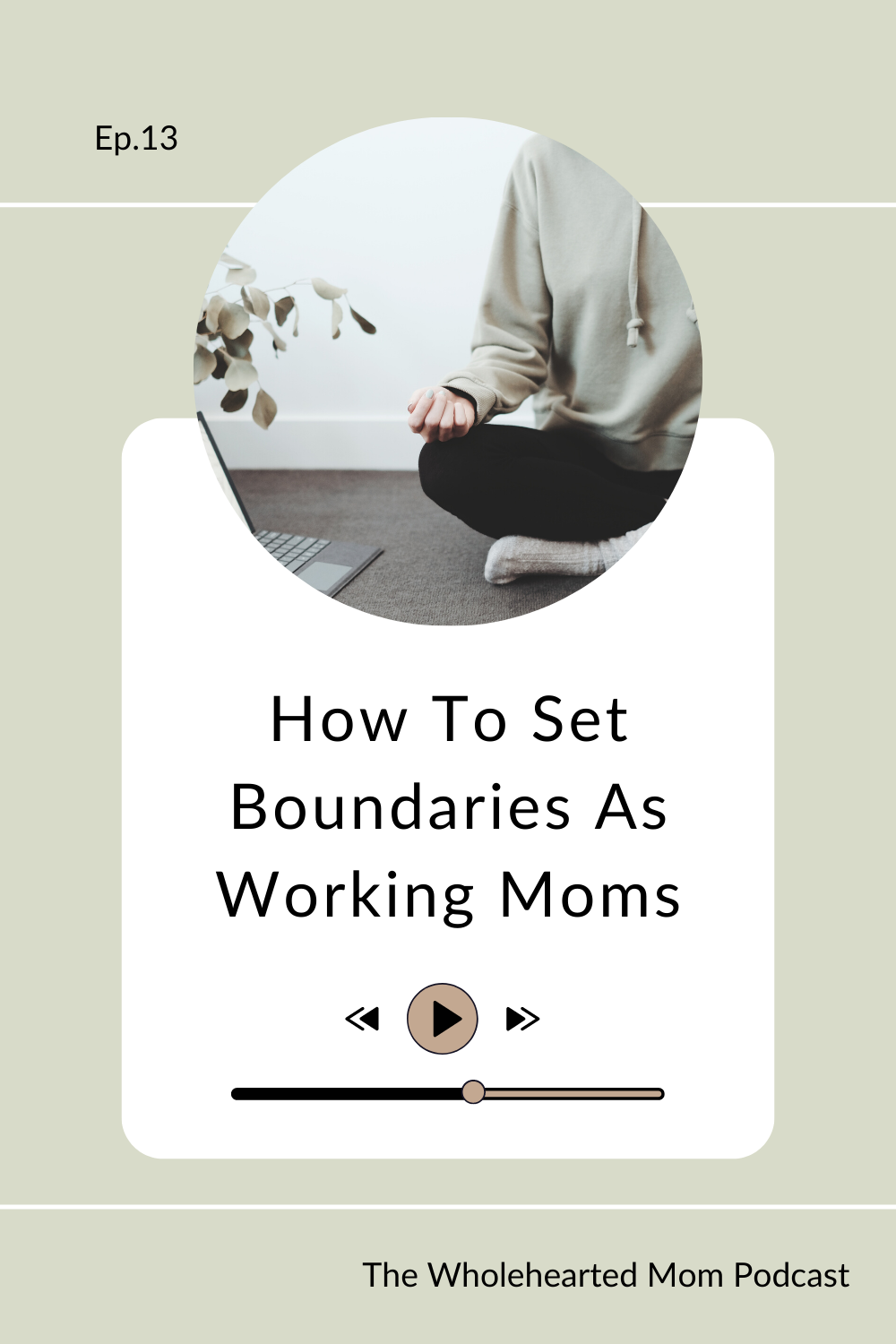 Welcome to The Wholehearted Mom Podcast! I am so honoured to have you here.

You’ll be glad you joined.

In this episode we will discuss:

Since we’re new here, will you help spread the word? Here’s what you can do to help a mama out:

I appreciate you so much for showing up and joining this amazing working mom community we are starting. Thanks for listening and for your support.

Episode #12 - How To Set Boundaries For Working Moms

Boundaries – an invisible line that defines what behaviours are acceptable. Boundaries can be physical (e.g., do not touch me) or emotional (do not lie to me). Boundaries can also be based on time or space (e.g., when I do X, Y or Z, please respect my time. As parents we are told over and over that we need to set boundaries with our children. And that boundaries are good for kids and help provide structure and a sense of safety.

Adults need boundaries too! Especially working moms. Because we are trying to juggle the demands of both work and home life while maintaining a sense of self.

What happens when we don’t put boundaries in place and uphold them?

We become overwhelmed, stressed out, impatient, resentful, and eventually burnt out.

I find that as a working mom I try really hard to put any extra work hours into time blocks when my children are asleep or busy in activities. This means that work-life boundaries can become quite blurred when we are trying to work only outside of the time that our children are awake and not at school. Which is why I believe too many moms feel like they lose themselves. In this scenario, there is no protection of time and energy to maintain that sense of self.

One thing that I’ve learned recently that I love about boundaries is just how empowering it really is to say no to something that does not feel in alignment with your goals or values.

Did you know that boundaries are actually a form of self-care as they honour your needs and wants so that you can feel respected and safe? What a beautiful lens to understand boundaries from. I know boundaries can sometimes get a bad rep as they seem restrictive, conflictual, or mean.

But I want to challenge that belief a little by sharing some of the key benefits of setting good boundaries:

So, now that we are clear on why boundaries are important and the amazing impact they can have on our lives and our relationships I want to talk a little about the practice of setting and upholding boundaries. This is one area that I think is often misunderstood or ignored.

If you take nothing else from this chit chat remember this….

I want to share a story to help illustrate this key point. Sandra is a busy working mom and is in management. Sandra was starting to feel really worn down and burnt out by work and feeling like she was always dropping a ball somewhere.

With the help of her coach, Sandra decided to create a boundary around not taking work calls over the weekend so she could spend intentional time with herself and her family. Sandra had a conversation with her work team and made her new boundary clear.

On Saturday afternoon she received a phone call from her boss. Sandra answered the phone. Her boss had been thinking about a new project idea and wanted to run it by her. Two hours later when Sandra finally got off the phone she began to feel resentful, disappointed, and guilty. Sandra’s afternoon was monopolized by the call and her mood was thrown off. Sandra was angry at her boss for not respecting her boundaries.

When Sandra met up with her coach that next week she shared her frustration and disappointment with how the boundary situation played out. Sandra’s coach gently reminded Sandra that her boundaries are hers to create, hers to communicate, and hers to uphold.

Yes, Sandra’s manager was thoughtless in not respecting her boundaries and calling on the weekend. However, it was Sandra’s actions of answering that phone call that allowed her boss to cross that boundary line.

When we think about upholding boundaries we need to take a serious look at what is in our control and how we can respond well with intention and wisdom to those things that are in our control. Sandra now turns her phone on do not disturb over the weekend to help keep herself accountable to maintaining her work boundary.

Can boundaries be uncomfortable?

Are there moments when setting boundaries feels uncomfortable? Absolutely! Unfortunately in today’s world we tend to expect people to have very little boundaries. We expect them to be available in an instance and accessible at all times.

Boundaries are especially uncomfortable when they are in relation to others because your boundary may affect that person’s life also. That’s why it is super important for us to detach from the other person’s response or behaviour towards your new boundary. Setting new boundaries can be uncomfortable but it’s so much more uncomfortable to go do what’s not in alignment with our goals and values.

In my guest interview for episode #11 with Ashlee Livingstone she said, “You are already not ok by not setting the boundary (maybe your feeling annoyance, resentment, stress, overwhelm) so by not setting a boundary you are going to continue to feel these things.”

All of that to say that the discomfort from setting your new boundary will far outweigh the pain, hurt, and stress of having no boundary at all and sticking to the status quo.

So, one way you can help to muster up the courage to learn into this discomfort is to come up with some affirmations around your boundaries such as

Ok so you might be wondering…. Where do I even begin in setting good boundaries for me and my family?

Well, if boundaries are yours to create, yours to communicate, and yours to hold. Then you need to follow these steps to implement the practice of boundaries.

First you need to recognize and believe that you deserve to be treated with respect. That you are worthy of having your boundaries respected. And that you have the power in you to uphold those boundaries regardless of how uncomfortable it may sometimes feel.

We know from habit research that when we start to implement boundaries, we want to start small and with one. So, I encourage you to reflect on what is bugging you the most right now? What change would give you the biggest impact? If your biggest struggle is to get off your phone then start by creating a boundary about the use and location of your phone. If your biggest struggle right now is having your time on the evenings and weekends filled up with work then maybe you need to start by setting a boundary about work hours or around time blocking. Only you can know which boundary is the biggest priority for this seasonin your life.

Step #3 - Align To Your Values

When it comes time to uphold our boundaries and stand firm in your decision it really helps if those boundaries are rooted in our values. If they are in alignment with the goals and vision you have for your life you will feel more confident in protecting those boundaries. So step #3 is to make a list of your top 3 values in the following 3 categories.

Communicate your new boundary to those it affects. I would complete this step in 3 mini steps by first writing out a list of the people that need to be made aware of your new boundary. Next I would write out some ways that you can communicate that boundary. Maybe conversation starts or key phrases. Lastly, make a goal of when and how you are going to tell each of those people. Maybe it’s a work email, a text, or next time you go for coffee.

Here are a couple example conversation starters for setting boundaries: And remember it doesn’t have to be complicated and no can be a complete sentence.

When you or someone else tries to cross your new boundary you need to follow through. This means controlling those things that are in your control such as your schedule, turning your phone on do not disturb, not answering, saying no etc.

And maybe even having a conversation with the person who continues to try to push your boundary. Here’s a little tip… If you have the temptation to not hold your own boundary do something to make it harder (put your phone away, turn it off, make it less accessible or desirable etc.)

I truly hope that this conversation on boundaries has been helpful. As I was sitting outside thinking about this topic I realized that setting boundaries is one of those things that we are never going to be perfect at.

It is definitely a skill that we can learn and improve, however life is unpredictable which means that we are going to continue to face new challenges and new seasons. I think the most important thing you can do as you navigate life is to stay in alignment with your values, to be open, and to communicate well. These 3 things will always serve you well as you navigate the ups and downs of life.

I want to leave you with this Brene Brown quote, “daring to set boundaries is about having the courage to love ourselves even when we risk disappointing others”.